A Positive Birth Experience in Donegal

Positive birth advocate and prenatal yoga teacher, Maria Coleman had her first child in 2008 in Letterkenny hospital. In this post she shares her daughter's birth story.

"Of course there was elation when I discovered I was pregnant, but I remember vividly the sense of dread that crept in when realised that I would have to attend a hospital for the birth. It was all a haze of epidurals and episiotomies and I was terrified. I had this terrible sense of being stuck between a rock and a hard place. Our dream of starting a family was beginning, but there was 'torture' of some kind to be endured.

As a departure point, I searched for a female GP. Although I travelled many miles from home to find her, it quickly became clear that she was an advocate of medical interventions, who was more than bemused by my queries regarding home births or anything of that nature. In truth, I was very aware that I was carrying a pelvic injury from a road traffic accident years before, so it would be more than foolhardy to attempt to fulfill my homebirth dream when I was living rurally with no supports.

My solution was preparation. I would birth in the hospital, but on my terms. I did yoga to strenghten and open my body and prepare me mentally for the challenges ahead. My husband and I attended Hypnobirthing training and we also hired a doula to come to our home and work with us one-to-one. Marie Mongan's 'Hypnobirthing' book became my bible, and the accompanying CD became the soundtrack of the pregnancy and birth. The key to the whole thing was writing a well-considered birth plan - and this is a key piece of advice to anyone navigating a similar path.

When we got to the hospital - after an hour-long journey over very bumpy roads - we were blessed to get a wonderful, open-minded midwife to help us through the birth. She clearly had read the birth plan and respected our wishes for privacy and minimum examinations etc., even though she admitted this was new territory for her. I had dim lighting, a mattress on the floor, a birth ball and hypnobirthing music. Most importantly, my husband was there by my side throughout, doing massage and reminding me of affirmations.

Possibly as a result of my pelvic injury, the baby was in posterior presentation, but despite these challenges, I needed no interventions until the very end, when my wee darling's airways needed to be cleared before she was breathing properly. This was a traumatic few moments that felt like years, but thankfully, she was on my chest and feeding soon afterwards.

In conclusion, I was hugely thankful for the professional help received at the end, but likewise, I was delighted that the medical staff left me, my husband, daughter and Mother Nature to our own devices throughout. No epidural, episiotomies or 'torture' after all." 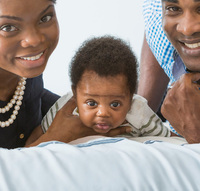